Here is the first time I am introducing “Peckori” in the comic! I think this might also be the first time I’ve posted the name of their species online. Peckori are one of my older creature species ideas, though I’ve only posted a few Peckori designs publicly throughout the years. I’ve been developing them here and there over time, and hopefully I can share more about them in the future!

I have vague ideas of the general demeanor for each faction of Peckori, and I think they might be fun to explore in some way. This sketch is one way to experiment with that! The most dominant idea about them, that has been integral to their design since their inception, is of rival Peckori factions who have been locked in seemingly endless war.

Peckori themselves are on the diminutive size as far as the average species goes. Standing at around 3 feet tall on average, or a little under 1 meter, their size belies their ferocious natures. Their smaller stature has proved fortunate for other species. If they were larger, their ferocious, war-hungry tendencies would surely result in deadly consequences in terms of bystander causalities and environmental destruction.

This is a good time to mention the distinction between “Peckori Comics” vs “Duskbirds Comics.” I might change this in the future if it becomes confusing. Essentially, I am treating “Duskbirds” as an experimental comic project, where I can play around with ideas without concerns about an overarching goal or narrative. The Duskbirds comics so far have either featured Elsium, one of my characters, or have been playful representations of everyday life.

Peckori Comics are different from the “Duskbirds” setting that the previous comics have taken place in. They are in the same world setting as the Elsium comics, but not the same setting as the “everyday life” comics. As I type this out now, I’m realizing that it’s probably no more confusing (or as confusing) as the distinction between the Elsium vs everyday life comics. But I still think it’s a good idea to have this written down somewhere. Maybe this will become pasted into a future “About” page!

For fun, I’ll post under the cut one of the older artworks I’ve posted of Peckori in the past!

END_OF_DOCUMENT_TOKEN_TO_BE_REPLACED 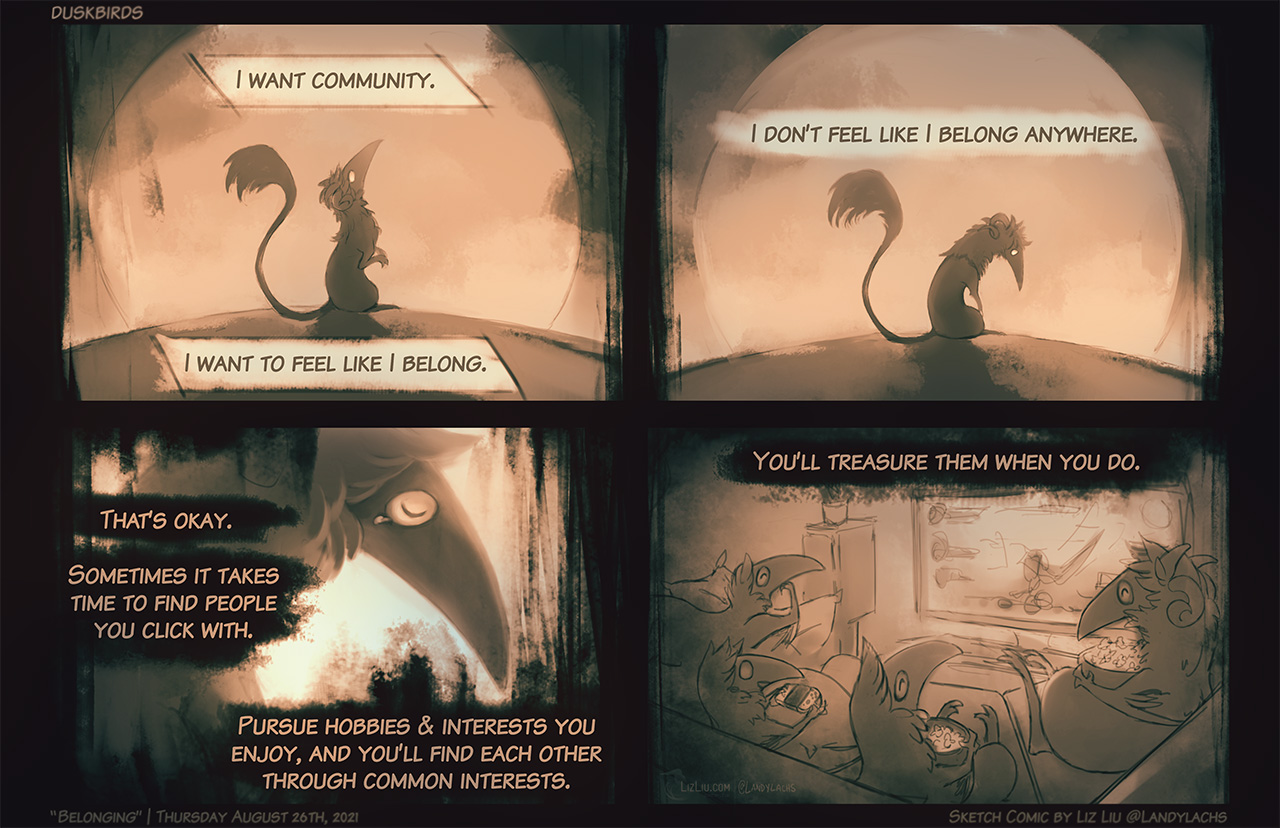 This comic is influenced by a few conversations I’ve observed over the years. Primarily having to do with expressions of loneliness, and feelings of alienation in our current social media age.